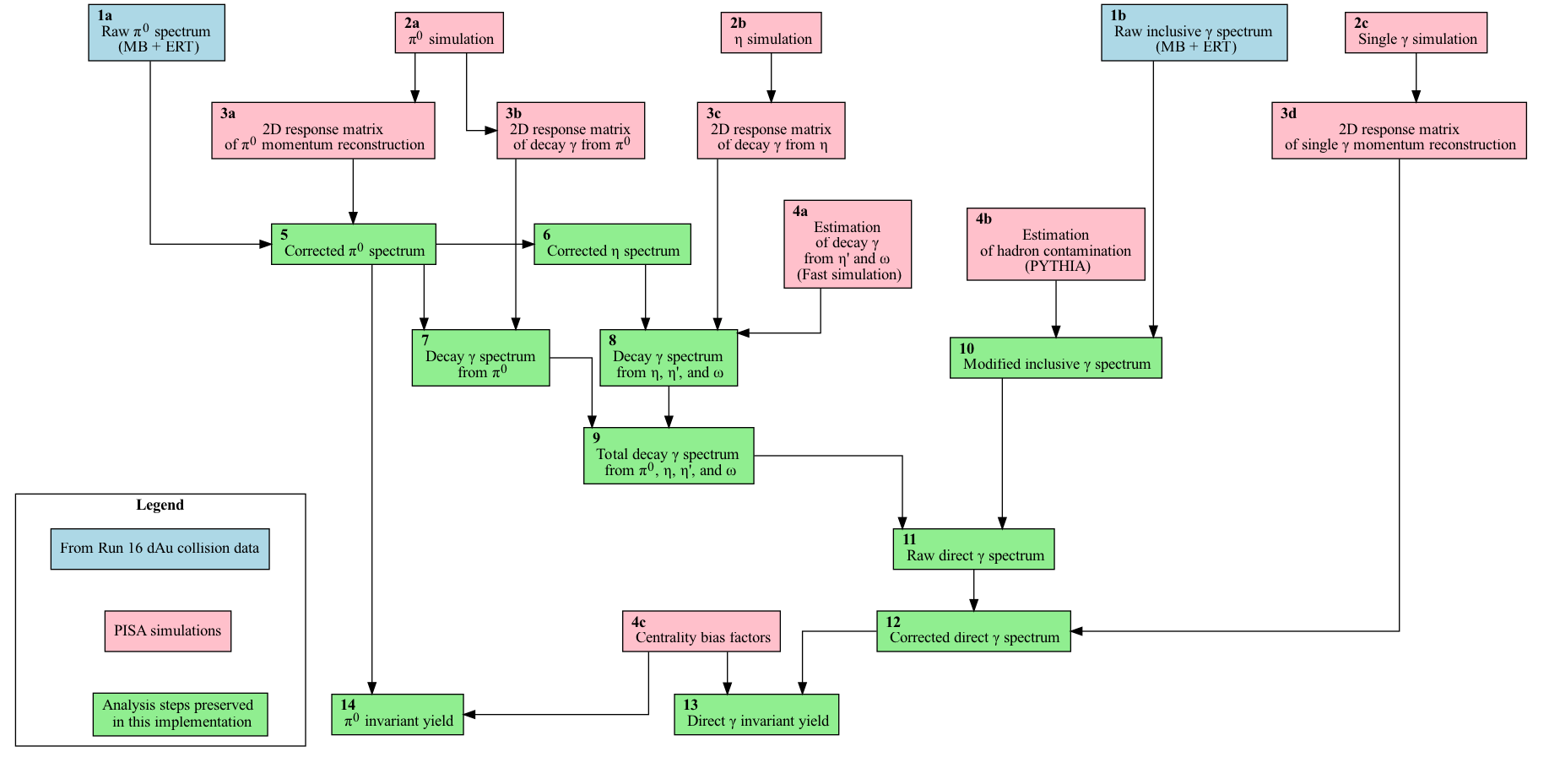 A PHENIX-managed repository has been created on GitHub in order to capture the original code (i.e. before adjustments were made to make it suitable for long-term preservation): https://github.com/PhenixCollaboration/emcal

Parts of this analysis use data samples kept in the storage area intended for long-term preservation. This is its location in the GPFS filesystem of BNL SDCC:

There are “DeadWarn” and “Timing” type of maps which are prerequisite of this analysis and they are considered as a separate “prior” component. In a condensed form, they are preserved in the folder sim_Pi0Histogram/creatingHistogram_fromTTree in the repository specified above.

Setting up the Environment

REANA operates using containers. For the analyses presented here, Docker images created by the PHENIX Collaboration are used. They are hosted in a private registry maintained the BNL SDCC. For the container to work properly, a number of setup step are required, as listed below:

Since every line in the REANA submission file (formatted in YAML) has its own environment the setup needs to be performed for every step that needs PHENIX-specific environment variables. For this reasons the commands are often used with csh wrapper that is reponsible for the setup. In the following example, ROOT macros are run from within the script pi0extraction.csh.

REANA implementation of this analysis is based on the workflow illustrated in this partial diagram.

In order for this analysis to run within the REANA framework certain adjustments need to be made, such as

Additional changes include some code cleanup and a minimal amount of renaming of code units, functions and scripts for better readability. The resulting code prepared for REANA is kept in this PHENIX repository on GitHub (Work in Progress): https://github.com/PhenixCollaboration/reana/tree/main/pi0extraction.

The analysis starts with files produced by the Taxi process. For example, the ROOT macro pioExtraction.cc takes the Taxi ROOT files as input and generates MB (min bias) and ERT (triggered) data as output. This macro is included in a driver script corrPi0Chain.csh.

Below is an outline of the analysis sequence with references to “block numbers” in the workflow diagram, along with pointers to relevant REANA components

These commands are included in pi0extraction.yaml. Currently a folder output_plots is created with subfolders txt,root,pdf, and the folder txt contains the actual analsys data.

Presented below is the core of Block 2 which includes processing of multiple input files (60 in total):

Adaptation of the ROOT macro for REANA, in a separate file pi0run.script:

In the REANA script, this is used as follows: cat pi0run.script | root -b. Note that a PHENIX-specific ROOT library libTHmul.so is loaded in the beginning, as this is necessary for proper operation of the macro.

Please refer to the relevant folder in the PHENIX GitHub repository for access to the actual material.

This is the driver script Pi0EmbedFiles.csh. Note that symbolic links are created to feed successive files from a holding folder, to the ROOT macro.

Processing of input files takes place sequentially and in this case takes a significant amount of time compared to other steps, i.e. a feew hours.

The results of all emedding runs are bundled together in a tar archive to make downloading easier. Upon retrieval the data need to be merged using the utility haddPhenix which is done in Block 3 (see below). Upon completion of this step the file embedPi0dAu.tar needs to be downloaded, and put in the folder from where the next step is launched. An example of the cownload command, assuming the workflow was named “embed”:

The macro generates the file EmbedPi0dAu.root by merging inputs via haddPhenix and produces Pion_RM.root. The complete description is in generationRM_Pi0.yaml, which resides with all subsidiary scripts in the folder generationRM.

The workflow description is as follows:

The result will need to be downloaded as follows (assuming the worflow was assigned the name “gen” in REANA - can be anything):

This REANA step (final in this analysis) is accomplished with scripts and macros named VConvolution_Pi0*. The file Pion_RM.root serves as input, along with text files residing in output_plots previosly produced by the macros pi0extraction.C and WGRatio.C:

Outputs are also written in output_plots/txt and contain